For the complete bibliography, see CV) 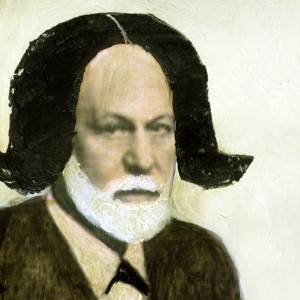 “Gabriola Island painter and performance artist Sheila Norgate takes similar risks in peeling back the layers of negative adaptation that defined the women of her generation. Her magic peel is laughter, as she deconstructs the preciousness” of gender role-playing. By sending up icons like Sigmund Freud, the father of penis envy (why would any self-respecting woman want one of those?), and creating a new iconography of birds and canines, she reduces our social behaviour to comedy.”
“Sheila wants us to understand how we come to be by understanding how she creates. Here is Eve. Here is the apple. It is just an apple. Even deprived of its mysterious connotations and repulsive constraints,it is delicious.“

To read the full article by Linda Rogers, Victoria’s Poet Laureate, in the November 2010 issue of FOCUS magazine, click here. 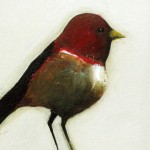 Norgate’s creative process evokes the image of a raven feathering its nest with treasures gathered from near and far, her paintings intricately woven together with photographs, symbols, words, and acrylics. Norgate’s inquisitive eyes mine her world for the perfect tapestry of elements to apply to a canvas; considering and discarding an array of choices until the richly-layered work reflects her complex inner flight”.
Ingrid B. King, MagazinArt Spring 2008 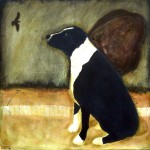 The transition from amateur to professional mirrored her own transition from timid nice girl to self possessed, confident woman and artist. Today she uses her paintings of dogs to explore issues of human, as well as canine, emotion and ambivalence…”
Gretchen Reynolds, Southwest Art, April 2008

“In Sheila Norgate’s mixed media pieces, words and visual imagery go together, as she puts it, like Fred Astaire and Ginger Rogers. Take the case of one piece in her show at Meyer-Milagros Gallery during the fall Arts Festival. It depicts a dog wearing a garment adorned with Sigmund Freud’s face. Atop the 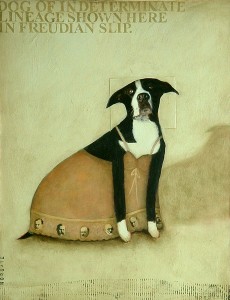 canvas are the words ‘Dog of Indeterminate Lineage Shown Here Wearing Freudian Slip’. It’s an explanation of the image, but also a pun, an expression of a personality that contains a sense of humour and a love of word play.”
Jennifer Dorsey, Jackson Hole News and Guide, Wednesday September 5 2007

“Norgate is known for using text and found images as well as her own original drawings and compositions in her brightly coloured canvases….Text is used to convey information but is also a design element in its own right….Fond of simple images and orderly compositions, Norgate produces works that are surprisingly layered.”
Gilbert Bouchard, The Edmonton Journal, Friday September 22 2006

“Sheila Norgate’s birds have flown the coop and whimsical canine companions have moved in. The artist has chosen 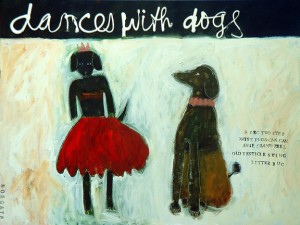 the spirit of the dog to represent her vision and wicked sense of humour on canvas. Known for using rich earth tones and primitive blocking of images, the 56 year old’s latest acrylic and mixed media paintings are droll entries into a dog’s world. With titles like ‘Nobody likes to see a lax and portly mixed breed cross’, and ‘Dances with Dogs’, Norgate explores societal trends with a comic twist”.
Dina O’Meara, Galleries West, Fall/Winter 2006

“In ‘Writing on the Wall’, Gabriola Island artist Sheila Norgate employs metaphors of birds, homing, and flight to chart her difficult course through childhood and into the world of her own identity. By folding family snapshots and poetic text into her richly hued paintings, Norgate finds a way of both asserting herself – stretching her own wings – and reconciling herself to her past, finding her way back home.”
Robin Laurence. Georgia Straight, March 25-April 1 2004

“The abstract paintings of Sheila Norgate didn’t introduce themselves to my brain as ‘paintings’, but as windows into 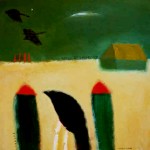 the private places of the unconscious. Imperfectly-shaped hearts rose from her paintings, like air bubbles in water – signs of life below the surface. I saw black birds standing and staring like watchmen over a changing tide, their wings tucked snugly against warm torsos of potential flight. Behind the birds, Sheila’s paintbrush often suggested homes, dressed as soft, tilted totemic silos of memory. Across the bellies of paintings, short phrases were boldly tattooed. At first glance, graffiti. But a closer look revealed they were curious, provocative, philosophical lozenges dressed as titles.”
Garth Labelle, Venue Magazine, Gabriola Island BC, March/April 2000 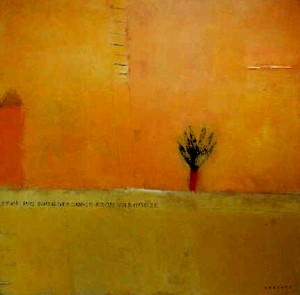 “Sheila Norgate has been described as an ‘abstract symbolist’. Her work is peppered with a 1980s design iconography: bird headed figures, houses, hearts, hand written phrases and concentric swirls which are painted and block-printed onto blurred fields of acrylic paint. With each painting she embraces the solitary challenge of expressionism, weaving her icons with loosely organized rectangles of textured surfaces. She is an artist who has developed a unique personal style”.
Mia Johnson, Preview Magazine, Vancouver BC, Feb 2000

“Norgate is a self-taught, Vancouver-based artist with a penchant 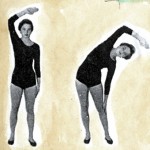 for finding the absurd in the everyday conditions of gender…The result of Norgate’s snipping, quoting and juxtaposing is a series of 27 saucy little works”.
Robin Laurence, art critic, Vancouver Sun, October 14, 1995

“Norgate is a watercolourist and a primitive printmaker who is as much a writer as an artist. Her style is simple and direct. Her crude stamps are striking and original, bright signposts of a journey that is unfinished”.
Mia Johnson, Preview Magazine, Vancouver BC, June/July/August 1994 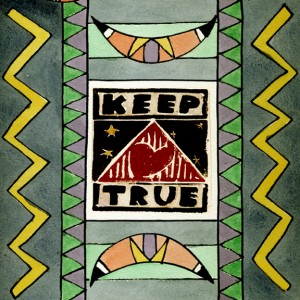